Daniele Cordisco, born in Campobasso in 1988, approached music from a young age thanks to his father, a major jazz guitarist in Italy.
Today he has a resume as a professional musician, in fact he had the opportunity to share the stage with some of the most important musicians/artists on the Italian music scene and beyond, including: Jeff Young (organist with Sting), Fabrizio Bosso, Danilo Rea, Max Ionata, Stefano Di Battista, Gary Smulyan, Godwin Louis, Jerry Weldon, Gege’ Munari, Giorgio & Dario Rosciglione, Jimmy LaRocca, Julian Oliver Mazzariello, Deidda brothers, Lorenzo Tucci, Gregory Hutchinson, Pierre Boussaguet, Sarah McKenzie, Gregory Generet, Michael Rosen, Ronnie Cuber, Daniele Scannapieco, Roberto Gatto, Donna McElroy, Christian Maurer, Roy Hargrove, Esperanza Spalding. He has been performing regularly with Renzo Arbore and its Swing Maniacs. Among the major awards that he received are: the scholarship for the “Berklee College of Music in Boston”, 1st prize at the “Chicco Bettinardi” (Piacenza 2011, achieved with Daniele Basirico and Giovanni Campanella), 1st prize at the International Competition “Young Talents Of Jazz Guitar” (Turin, 2007), the prize for best guitarist in the “Tuscia Jazz Contest” in the summer of 2010 and has crowned the dream of being able to show off in front of one of the stars of the jazz guitar of all time, Jim Hall. The meeting ‘took place in the competition “The Genius Of Eddie Lang” (Isernia), where the American guitarist was invited as president of the jury. Daniele Cordisco won 1st prize and the chance would have been just the decisive vote of Jim Hall.He recorded his first album, “This Could Be The Start”, for the italian label “Nuccia” in 2014 and since then he has recorded with: Jerry Weldon, Ben Paterson, Benny Benack Denise King, Stjepko Gut and many others.Today he teaches jazz guitar at the “Conservatorio di Musica G. Da Venosa” in Potenza and at Centro Ottava in Rome. 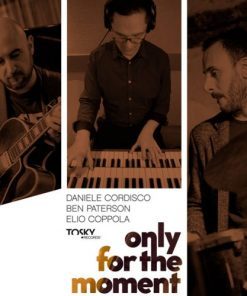