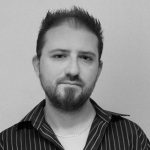 Francesco Persia was born in Rome in 1983. He began studying the piano when he was very young and after this first musical step he discovered electric guitar at the age of fourteen. In the following years he started his career as musician/songwriter playing live music and doing studio projects as producer/composer with a big commitment. In 2005 his rising passion for audio engineering brought him to learn all the secrets of this world including recordings, sound designing, editing and cinema/TV post production techniques. Over the years his many works as sound engineer helped him to improve all the skills and to increase all the required knowledge very quickly. Francesco Persia is now working in a big Italian company called “Augustus Color” as Pro Tools Operator, Re-Recording Mixer Assistant, Dialogue Editor, Sound Engineer, ADR Engineer.