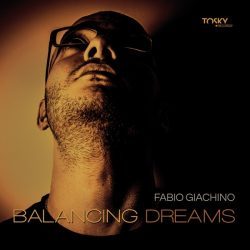 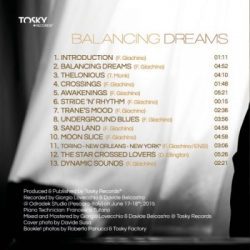 “Balancing Dreams” is a piano solo album by the young and talented pianist from Turin. After the successful albums in trio with Ruben Bellavia and Davide Liberti, he shows all his skill as a piano soloist, in a project full of outstanding musical ideas: new compositions, some standards and a collaboration with the renowned rapper ENSI , mixing jazz and hip hop. Balancing his desires and his dreams, Giachino sets his expressiveness free and leads us into an enthralling space through an uninterrupted, intimate dialogue, where his love for jazz, and music in general , reaches its highest aesthetic value.

“Balancing Dreams” by Fabio Giachino. Class of 1986, he is considered one of the most promising talents to appear on the Italian music scene in the past few years.Born in Alba, but taking Turin as his home town, he was awarded important Italian and European prizes, gaining recognitions both nationally and internationally. As a soloist he won the “Premio Internazionale Massimo Urbani 2011”, the “Premio Nazionale Chicco Bettinardi 2011”, and the “Revelation of the year 2011″JazzUp Channel Red Award. With his trio he was awarded  Special Prize as “Best Band” at the “Bucharest International Competition 2014”, the “Fara Music Jazz Live 2012” prize (as best soloist and best band), the “Barga Jazz Contest 2012” prize and the “Premio Carrarese Padova Porsche Festival 2011”. In 2013, 2012 and 2011 he was among  the best 10 Italian  pianists according to the “JazzIT Awards” referendum, organized by the magazine JAZZIT. In 2013 his trio was also among the best 10 Italian bands. His debut album “Introducing Myself”, recorded with his trio and featuring the sax player Rosario Giuliani, was included in the 2012 “100 Greatest Jazz Album”  selection, compiled by the magazine JAZZIT. In parallel with his accademic classical studies, which led to a Music Diploma in Organ in 2006 and a second level Music Degree in 2009, he also sudied jazz, through private lessons and workshops with the following musicians: A.Faraò, D.Moroni, R.Zegna, D.Rea; F.D’Andrea, S.Battaglia,G.Trovesi, P.Tonolo, F.Di Castri (Siena Jazz 2007, where he was awarded a scholarship for 2008); B.Harris (Felt Club Roma), J.Calderazzo, K.Rosenwinkel, S.Colley, J.T.Watts, S.Bonafede (Saint Louis College Rome). In 2012 he got a Master of Jazz Music Degree  at the “G.Verdi” Conservatory of Turin, with F.Di Castri e D.Moroni. He flew to Detroit with Emanuele Cisi on a study exchange trip between the Jazz Department of the Conservatory of Turin and the Wayne State University of Michigan, where he performed with the University’s big band and their professors. In the same years,2012 and 2009, he took private lessons from Fred Hersh e Hal Crook. He has performed in festivals and clubs in France, Belgium, Switzerland, England, the Czech Republic, Poland, Turkey, Rumania, U.S.A. and in innumerable places in Italy.

Jazz Critic Scott Yanow says:
Balancing Dreams is an impressive solo recital by Fabio Giachino, a very skilled pianist who deserves to be better known outside of his native Italy.

This site uses Akismet to reduce spam. Learn how your comment data is processed.