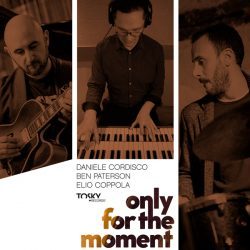 Born in 1985, originally from Naples, Elio Coppola is one of the best jazz drummers on the jazz scene. He began his studies with drummer Stefano Tatafiore and continued with the great master  Kenny Washington. Has played with some of the best musicians in the world including Benny Golson, Joey De Francesco, Peter Bernstein, Dado Moroni, Ronnie Cuber and others. It is important to remember the friendship and mutual esteem that binds him to the great master Tullio De Piscopo who recently invited him to the Mercadante theater in Naples to open one of his concerts. He has recently released his first album ititled “Infinity” with the brilliant Emmet Cohen and bassist Giuseppe Venezia. They, together, have been performing  around Italy in about 60 concerts and also in the in New York, in the famous Guggenheim Museum, Small Jazz Club, Mezzrow Jazz Club, Dizzy’s Club Coca Cola and Birdland Jazz Club and major jazz venues in the States. Elio is currently workin’ with the Yamaha Music School and the Pomigliano D’Arco Jam Music School (NA). He has also held seminars on the history and evolution of drums in jazz music. Recently received the “Excellencies of the City” award from the municipal administration of Somma Vesuviana (in the province of Naples) for having brought the name of his city around the world.